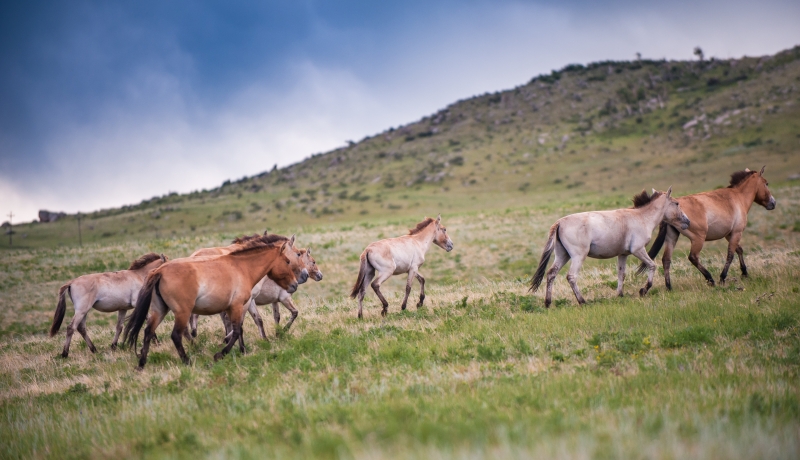 Khustai National park has much to offer although a relatively small park compared with parks.  Located 100 km southwest of Ulaanbaatar capital. It is about two hours of drive from the city.

The main reason why to visit this park is simple and unique. Khustai is famous for one of the world’s great wildlife success stories, the recovery, and reintroduction of the Przewalski horse, or takhi – the native wild horse of Mongolia.

Several decades ago takhi had disappeared from the country, victims of habitat loss and poaching for meat. However, a small number of survivors lived in a European zoo, and from this scattered remnant, through a program of careful breeding and international cooperation, a wild population was rebuilt. From 1992 to 2000, a series of airlifts brought 84 takhi from the Netherlands. The horses were kept in fenced enclosures until acclimated and eventually set free.

As of 2018, Khustai was home to about 350 wild horses. The park, covering 50.260 hectares, is a prime example of Mongolia’s forest –steppe environment. Thanks to high variability in soil type, moisture, altitude, and solar aspect, the vegetation is relatively diverse. More than 450 vascular plants have been recorded, including a number of rare and endangered species and several of medicinal value. The quality and variety of ecosystems within the park support abundant wildlife. In the catalog of species are 41 mammals, 126 birds, 2 amphibians, 3 reptiles, 15 fish, and more than 130 insects.  Important animals apart from wild horses include red deer, Mongolian gazelle, wolves, corsac foxes, black vultures, Manul cats, lynx, and large falcons.

The Park’s highest point is Khustai mountain, a sacred summit rising to 1840 meters. Khustai means birch the name refers to the trees that cover four percent of the parks most of the area.  It has been the object of worship by local people. Occasional religious ceremonies are held on the summit, which is marked by a large ovoo surrounded by thirty smaller ovoos.

The park has been long regarded as a special area. In the past, it was protected by hunting ground for the last khans. It is also served as a grazing reserve to be used in times of droughts.  There are many interesting archaeological sites in the park. The most impressive site lies in the Tuul river valley, just west of the park’s boundary. It is called Ungut Grave. The gravestones were carved in human likeness by people of Turkic origin about 1200 years ago.