Nomad Mongolian food is highly connected to the five-snouted animals. A milk and meat based diet is common in this land. 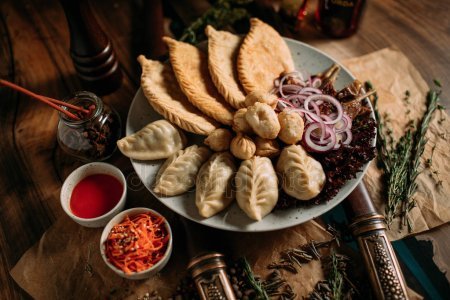 Nomad Mongolian food is highly connected to the five-snouted animals. A milk and meat based diet is common in this land.

Since early times, Nomadic people began processing their animal milk into many different types of dairy products like soft cheese, various curds, yogurt, butter and oils. Many people believe that Mongolian people are mainly meat-consumers. However, in summer and autumn,  they prefer eating their dairy and fresh milk, in order to cleanse the body and for another source of nutrition. Winter and spring are the seasons when they would eat more meat as well as noodle based soups.

Most Mongolians would start the day with traditional tea, translated as “Tea with Milk”.  This basic tea can later be added to with bone, bone marrow, rice, dried meat, and even medical herbs to combat fatigue.

Nomads follow a motto which says there is nothing to waste from the animals, by which they mean sheep, goats, horses, camels and cows. In their life, they try to use everything possible which comes from animal, so there is no waste.

Mutton and beef are more widely for food used than camels and horses. Horse meat would be used only in winter-time due to its high content of protein and amino acids.  One specific thing about animals in Mongolia is that they are are pasture raised. They graze in open landscape with 600 different types of grasses. This makes their meat extra nutritious and delicious.  Furthermore, pasture raised meat is determined as the most healthy option for human body.

Another widely used product in the Nomadic nation would be healthy milk and various types of dairy products.  Nomads learned how to process milk in different ways without chemicals or additives. After the mating season in March and April, milk is abundant during the summer time, when Nomadic people have endless work to process their milk into the different types of dairy product to use in the winter time.  If you come to Mongolia, Airag (fermented mare’s milk) and the traditional barbeque, Khorkhog, would be among the most interesting beverages and cuisines to try. After milking mares for two hours each, milk would be collected in large bag made from cow-hide. This unique beverage is widely used by Mongolians during the summer time.  Mongolians have known its healing effects since ancient time. If you drink mare’s milk or airag, it is rich in vitamins ABC and is high source of protein. It has the ability to kill bad bacteria in the stomach and rebalance the good bacteria in your metabolism. For liver and lung disease, airag can be used. Airag contains 4-5 percent of alcohol. Except for summer season, this traditional beverage would be widely used for special events such as weddings, official events, the Naaadam festival…etc.

One of the very specific cuisines of Mongolia is definitely Khorkhog. Goat or sheep meat is for this meal, and it takes unique skills to make a khorkhog barbeque, which is cooked with the help of hot stones.